The Bineys Celebrate 30 Years with Mercy Ships, Look to the Future of Africa 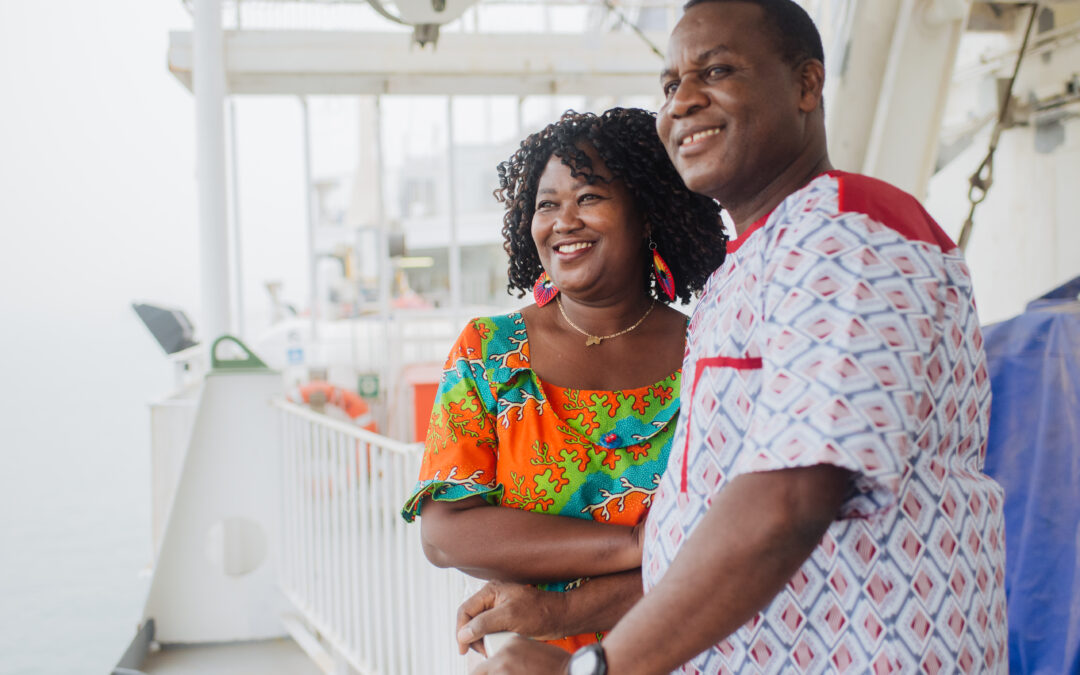 Joe and Agnes Biney joined Mercy Ships in the 1990s with no end date. Their prayer was
always: “God, if you still want us here, give us the grace to continue to serve.”

They left their home in Ghana to live on the original Mercy Ship, the Anastasis. From there, they
would go on to raise two children at sea, transferring to the Caribbean Mercy and then to the
Africa Mercy®.

Together, the family sailed around the world, from Africa to the U.S. and Central America.

Floating Family
For Agnes, living and working so closely with her family was a gift.

Josephine and Caleb Biney attended school at the then-fledgling Mercy Ships Academy.
Josephine stayed until she was 16, when she left to high school in the U.S. Caleb went all the
way from kindergarten through 12th grade on board – the first student to do so.

“They came on board as babies, they grew up with the ship culture,” Agnes said. “The ship was
their home; the ship was everything to them.”

She and Joe call them “third-culture kids,” although their culture is not one that can be traced
back to any one country.

She laughed as she admitted, “They are in between.”

Despite the challenges her kids have faced acclimating to life outside the ship, Agnes said, “It’s
been a joy.”

Josephine will soon graduate from nursing school. Caleb is at the University of Dallas. He wants
to study microbiology and become an inventor.

Agnes can see the influence of Josephine’s time helping in the wards, and Caleb’s hours in the
ship’s lab. Both of their paths have been guided not just by the need they saw as children, but
by the work that engaged their young minds, and by the patients they knew and loved.

‘It’s a Miracle to Us as Well’

Over her 30 years on board, Agnes has seen patients’ lives changed through surgery. And
she’s been impacted just as powerfully.

“Though we are transforming the patients, we are being transformed as well,” Agnes said. “We
see the miracle and it’s a miracle to us as well.”

She carries with her the stories of patients who became friends, and will remain a part of her
story forever.

Patients like Grace, a teenager from the Republic of the Congo who had a 2.2-kilogram facial
tumor removed. She suffered from the large mass for years, as it limited her breathing and food
intake, threatening to suffocate or starve her.

Agnes remembers one special moment in Grace’s recovery during that field service in 2014.
“After everything that she had faced, they took the bandages off,” Agnes said. “She looked at
herself. And then she said, ‘God is good.’”

Then there was a woman in Liberia who received surgery for a childbirth injury called an
obstetric fistula. More than 90% of fistulas can be repaired surgically, but many women in Africa
never get the chance to have an operation, due to financial hardship and a lack of trained fistula
surgeons. Once this need was identified, Mercy Ships began offering this specialized surgery,
and training other surgeons to perform it.

Agnes knew this woman’s condition had likely isolated her from her community, taking away her
hope for a good future. Finally, she’d found help.

Agnes would sit with her in the ward, washing and braiding her hair. This woman was just one of
many receiving surgeries for the same condition. Other crewmembers would join as well,
painting the patients’ nails.

From Brokenness to Hope
Growing up comfortably in Ghana with a father in the military, Agnes had always had access to
medical treatment. She was shocked when she first came on board the Anastasis and saw
some of the tumors and diseases affecting the patients.

“I’m like, ‘How can something like this happen to a human being?’” she said. “You look at a
human being in that state, it really breaks your heart. You get broken.”

But she didn’t stay broken.

“From there, you see how God works,” she said.

From Agnes’ role in HR, bringing in volunteers, to Joe’s service in the engine room, keeping the
lights on, she knows they’ve been used by God to bring healing to others. At the same time,
they’ve been given a gift that many people never get to experience.

“I’ve seen a bigger side of God,” Agnes said. “He can use anybody to work out His purposes in
the lives of His people.”

Agnes holds the patients she’s had the privilege of serving in her heart. They’ve changed her.

“I’m sitting here talking about Grace, I’m talking about this lady, when, I mean, they are part of
my life,” she said. “What I witnessed is what I saw, is what we were part of. … It’s a privilege to
be part of their story. And they also are part of my story.”

Looking to the Future
Joe and Agnes continue to serve together on board the Africa Mercy. And after three decades
on three different hospital ships, they have a unique perspective on what is happening today.
“It’s such a wonderful and historic time,” said Agnes.

The newly built Global Mercy® will be commissioned on June 2, during the upcoming Mercy
Ships Africa Celebration in Dakar, Senegal. Once in service, the largest ever Mercy Ship will
more than double the fleet’s capacity for hope and healing.

“We are so excited and happy about what the Lord is going to use the Global Mercy plus the
Africa Mercy to do on the continent for the next 30 years,” Agnes said. “It is a vision and a
dream come true.”

Along with the commissioning, in May and June, another historic moment is taking place in
Senegal. Political leaders and scientific experts from across the continent are gathering to
create a roadmap to safer surgery in Africa by 2030.

After years of witnessing the depth of the need firsthand, Agnes and Joe are hopeful that these
leaders will chart a course to a healthier future for the nations and people they love.

In May and June 2022, Mercy Ships will join the nations of Africa to celebrate the progress
that’s been made and look toward the future, crafting a plan for safer surgery by 2030. This is
your story too, and you’re invited to join us virtually! Learn more at https://mercyships.africa/