The Africa Mercy® Welcomes First Patients on Board 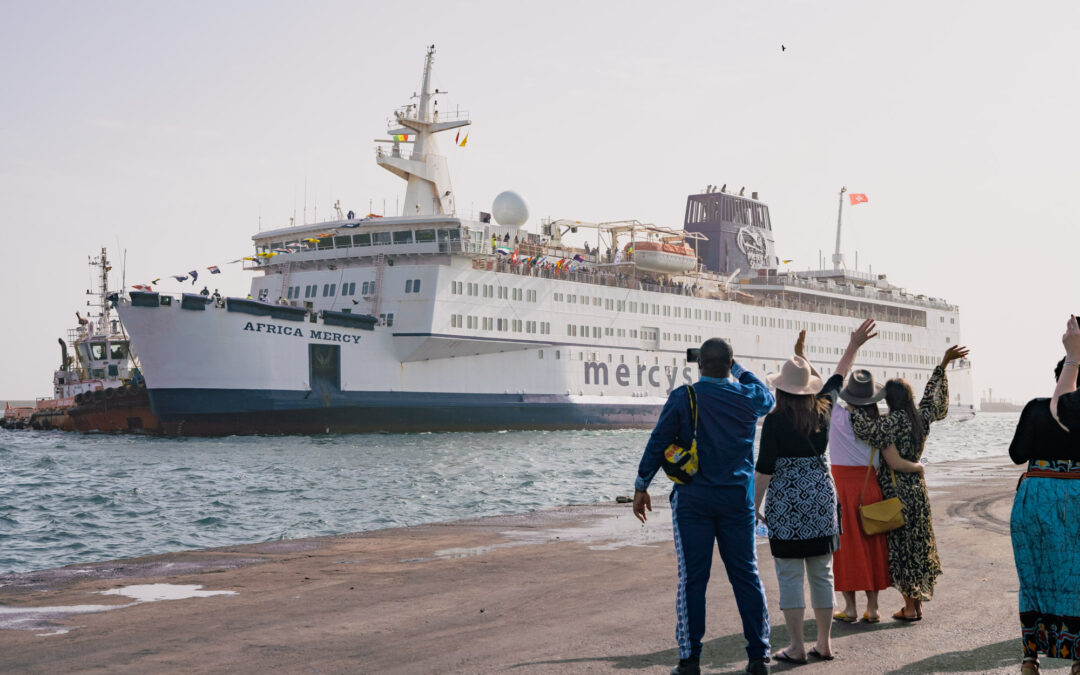 Two years ago, when the Africa Mercy® sailed from Senegal, hundreds of patients were left still waiting for their chance for surgery.

On February 1st, the ship returned to the port of Dakar to bring hope and healing to these patients and their families.

Three weeks later was the exciting culmination of this long wait. Nurses had spent hours scrubbing every inch of the hospital, down to the plastic toy blocks the pediatric patients would soon play with. The operating room was meticulously sterilized after two years of disuse. The dockside tents – including pre-operative, rehab, and outpatients tents – were set up and filled with eager team members. The volunteer community on board grew with new crew flocking in from around the world.

“Two years ago, we had to say, ‘I’m sorry. We can’t help you right now. We’ll be back – we just don’t know when.’ Now, we’re fulfilling a promise to our patients. The door is open, and we step through that door when we start operating. That is the moment we start doing what we came here to do,” said Dr. Miriam John, Mercy Ships International Chief Medical Officer.

The first patient to receive surgery during this field service was Sokhna, a young mother in her twenties. She’s from southern Senegal, where she and her husband are farmers. Sokhna spends most of her time tending to her home and taking care of her one-year-old baby, the joy of her life. She’s spent her life living with a cleft lip, and first had hope that she might receive surgery back in 2019, when the Africa Mercy sailed to Senegal. But before Sokhna could get to the ship, she heard the news that her operation would have to wait.

In the face of a devastating delay, Sokhna stayed positive, saying, “It must have been God’s plan that I didn’t have surgery then.”

Two years later, when the Africa Mercy returned to Senegal, Sokhna’s faith was rewarded as she became the very first patient to enter the ship and receive surgery. She said she didn’t have many nerves on her admissions day: “I feel just peace and joy.”

She’s got her eyes set on the light at the end of the tunnel to the thing she’s most looking forward to. She can picture it already: the moment she finally goes home healed and her husband sees her, for the first time, with her cleft lip repaired.

Sokhna’s hospital admission and surgery were followed by a second of the day: Benjamin, a 23-year-old man who had his facial tumor removed. He first heard about Mercy Ships from his volleyball coach back in 2019. But when he was told the Africa Mercy would leave early due to COVID-19, the surgery to remove Benjamin’s tumor was postponed.

He was told Mercy Ships would return but found it hard to hold onto hope. Standing in front of the ship on the day of his hospital admission, he said he’s finally starting to believe it’s really happening.

“I’m just happy to be here, waiting for surgery,” Benjamin said. “I feel confident. I’m leaving it all in God’s hands.”

On the morning of the surgery, a familiar sound filled the ship. Pausing in the operating room hallway moments before surgery, volunteer surgeon Dr. Gary Parker spoke a word of prayer for Sokhna and Benjamin. Through the intercom system, volunteers across the ship set down their work to join him in prayer. For these precious first surgeries, and for the hundreds more that will take place over the coming months.

Thank you for being a part of it.