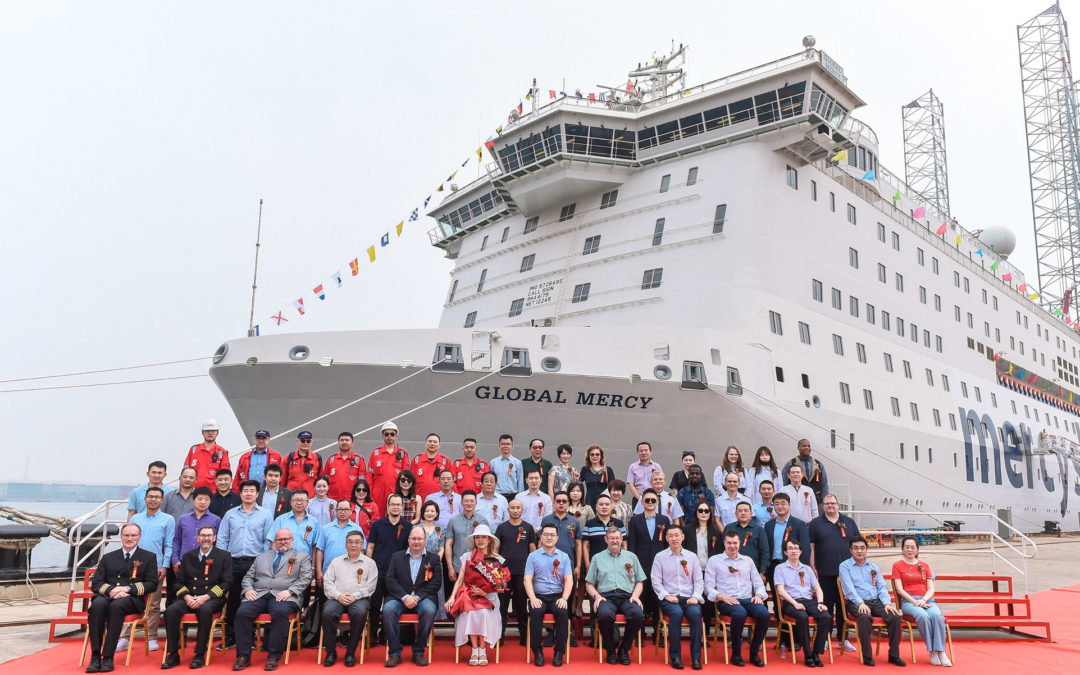 GARDEN VALLEY, TEXAS – 29 June 2021 – Global health charity, Mercy Ships, reports that after a completion and acceptance ceremony on June 16, followed by a handover celebration at the Tianjin Xingang shipyard this past week, the world’s largest civilian hospital ship, Global Mercy™, has successfully been delivered and the charity has taken possession of their brand new vessel.

The final handover of the newly constructed hospital ship from shipyard to owners was celebrated in the presence of representatives from Mercy Ships, project managers from Stena RoRo, together with shipyard management, joined by a remote audience of Mercy Ships staff and crew from around the world. The traditional shipyard events are designed to wish happiness to the ship and its crew on the seven seas. The building phase has now been officially completed and the charity is one step closer to the first surgery onboard.

”This day is a dream come true – not only for us, but for those we serve,” stated Don Stephens, Mercy Ships founder who spoke via video to those attending. ”African heads of states and ministers of health have often expressed a desire for more of their healthcare professionals to be trained in-country. This ship will do exactly that. Many who suffer from disability and disfigurement will have access to surgical treatment and whole-person care in healthcare systems that will enable them to reach their Godgiven potential. We hope that this new vessel and the volunteer crew who serve on her will bring hope, healing and transformation for the next 40-50 years,” he added.

Per Westling, CEO of Stena RoRo, said “We are very proud to take delivery of this special ship. The activities to be carried out onboard have placed special and high demands on the construction of this ship. For the yard, it was the first time this type of vessel was built – a challenge that they managed very well. For Mercy Ships, delivery means that their capacity to help more than doubles. And at Stena RoRo we are happy to be a part of their fantastic work through Global Mercy.”

Mercy Ships has been working on this new ship project for more than eight years. Contracts were signed in 2013, and the keel laid in 2015. Sea trials were successfully completed in late April this year.

In July, the Global Mercy is scheduled to sail to Europe where, hosted by the Port of Antwerp from early September, the ship will be further outfitted with IT and medical equipment installations and soft furnishings. Mercy Ships volunteer crew will also begin to join the ship in stages during this phase which concludes with open events in Rotterdam in Q1 2022 where the ship will be presented to sponsors, future volunteers, the media and other interested parties. A further Africa welcome is being planned in Dakar, Senegal before the ship begins full operation.

It is estimated that surgical conditions account for nearly one-third of all disease in the world (Lancet 2015). Building on the charity’s more than 30 years of experience in Africa delivering surgical care, the Global Mercy is equipped with first-class training facilities designed to multiply impact within the nations served. Volunteer professionals will contribute alongside local healthcare professionals in the host country. With 12 decks, the 37,000 GRT Global Mercy is equipped with six operating theatres, hospital beds for 200 patients, a full laboratory, and simulation training areas.

Swedish shipbuilders Stena RoRo have been responsible for construction supervision of this unique project. French company Barry Rogliano Salles (BRS) acted as a broker, detailed designs were completed by Deltamarin in Finland and construction has been carried out in China. The Global Mercy is classified by Lloyd’s Register in the UK and sails under the Maltese flag. Many more companies from around the globe contributed to the ship’s completion which is a first of its kind.

Mercy Ships is ramping up their recruitment of long and short-term volunteer professionals to lend their time and expertise in this new season. More than 640 medical, maritime and programmatic crew will be able to live and serve onboard with space for up to 950 on ship when it is docked. Currently, Mercy Ships crew come from more than 60 nations. For more information see http://www.opportunities.mercyships.org.