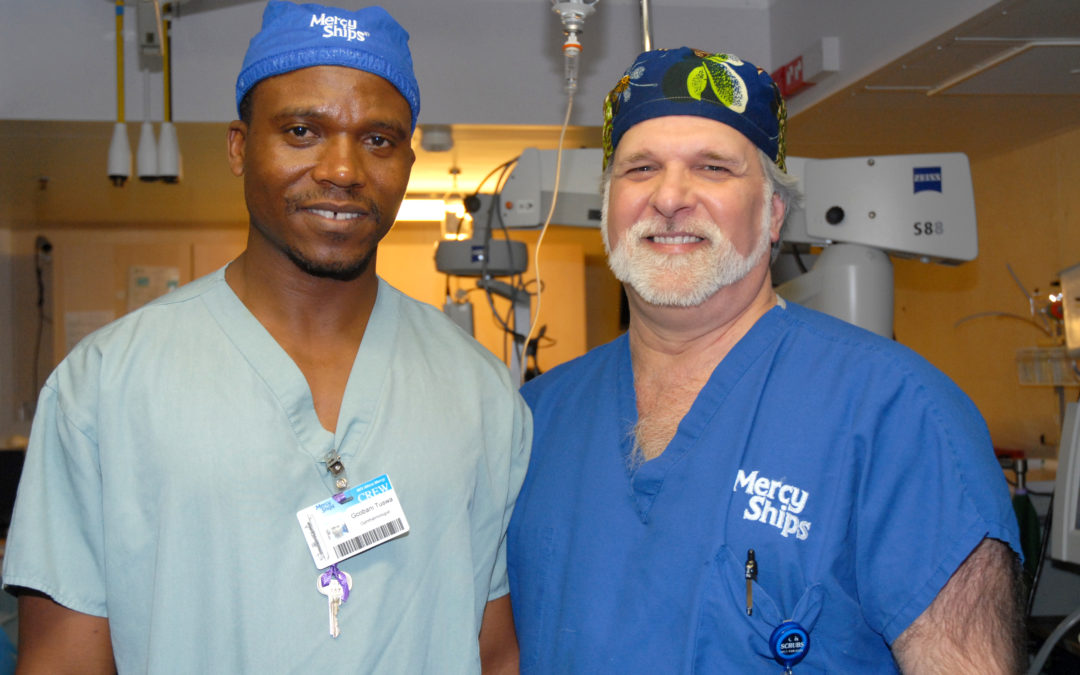 Our Heroes of Healthcare series features incredible medical professionals spanning the continent of Africa. From Benin’s first Reconstructive Plastic surgeon to a maxillofacial surgeon in Guinea, this series highlights the outstanding men and women who are changing the healthcare landscape in their countries. Through our medical capacity building program, Mercy Ships strives to leave a lasting impact in each nation we serve by partnering with medical professionals and strengthening local healthcare systems.

Today, we bring you the story of Dr. Gcobani Tuswa, an ophthalmologist who was the first trainee of the Mercy Ships program called Mercy Vision South Africa in 2009. At that time Dr. Tuswa said: ‘Though it is difficult to determine my future, I am focused on being rurally based and operating at a high volume.’ And that is exactly what Dr. Tuswa is doing now. He has his own practice in Queenstown, right in the middle of the province Eastern Cape in South Africa.

When Dr. Tuswa came to Mercy Ships in 2009, he was already a doctor. From Dr. Glenn Strauss he got an intensive six-week training which helped him develop new skills and increase his confidence: “At one point I was operating in an operating theater when my fellow trainee in the theater next to me asked me for help. Dr. Strauss wasn’t around, because he had to leave for an emergency. I walked over, looked at the situation and helped my fellow trainee. While doing that, without my knowing, Dr. Strauss returned. But, instead of taking over from me, he let me do my thing and watched me do my work. I only noticed him when I was done. He was just standing there smiling and he complimented me on what I just did. That was, of course, very important to me, but also showed that he is not only a good surgeon, but also a good teacher, and that is a unique combination.”

A Cure for Cataracts

Dr. Strauss taught Dr. Tuswa to perform Manual Small Incision Cataract Surgery (MSICS), an effective and inexpensive procedure to treat cataracts. Knowledge of the procedure is a particularly useful skill for ophthalmologists in Africa. Cataracts are a common condition among the population of South Africa, especially in the less developed parts. Cataracts develop slowly but can have far-reaching consequences without proper treatment. Eventually, the condition can make you completely blind. In fact, most of the blindness in the world is caused by cataracts. That happens mainly to people who live far away from good care or who do not have the money to afford surgical treatment.

The advantages of MSICS became evident to Dr. Tuswa soon after his time with Mercy Ships: “When I came home to my hometown, Mthatha, I started working in a public hospital and they were cancelling surgeries because the hospital had a shortage of suturing material. And I said, no, we can do this with the MSICS. A major advantage of this procedure is that you don’t need sutures. That saves materials, but also a lot of time. I showed them how this surgery works and they were amazed. MSICS is now a standard cataract operation procedure at the Mthatha hospital. The four junior doctors that I worked with went to learn this procedure and became eye specialists as well. Now they are working in different places around the country.”

In 2010, Dr. Tuswa continued with his specialist residency training at the University of the Free State. He went on to work in different places in the Eastern Cape. During that time, he got married and now lives in Queenstown with his wife, three children and their dog. He opened his own practice in 2020 – a significant development, as it’s the only one in the area and the public hospital does not have an ophthalmologist. Dr. Tuswa has only been in Queenstown for a year, but he’s already looking ahead: “In the future I want to expand my practice. Hopefully I’ll be able to open operating theaters and find colleagues to work with. Then we’ll be able to help even more people and continue to fight the cataract problem in my country.”