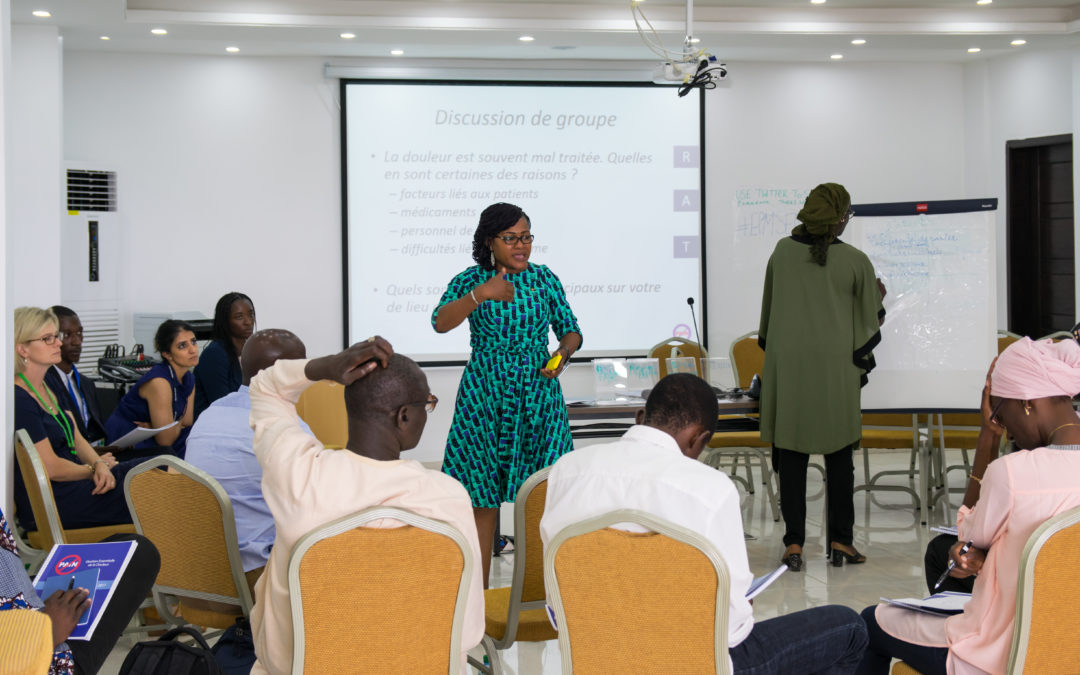 “When I was 12, I saw a woman on TV … her suitor had burned her with acid. Her face had become fused to her neck, so she could never look a person in the eye.” Dr. Odry Agbessi mimics the condition, tucking her chin in close to her throat. “There was not one plastic surgeon to help her in Benin, and the family did not have enough money. So people pitched in to send her abroad. I was so touched by that story, that’s when I chose my profession,” she says.

That was years ago, but it steered Odry’s course from then on. After graduating from secondary school, she began her medical studies in Benin. “The journey has not always been easy. In my country, women do not often become surgeons,” she says.

Eight years later, she finished her general degree in medicine, going on to win a scholarship to study plastic surgery in Morocco. But due to family circumstances, Odry decided to stay at home, where she spent another eight years practicing general surgery. “Then I was offered the opportunity again,” she says. By this time, things had changed, and Odry went to Morocco, finally able to pursue her goal.

“It was in 2015 that I finally succeeded in becoming a plastic surgeon,” she says. “Of course, there were many times it wasn’t easy, times I wanted to give up,” she recounts, “but, with strong spiritual support, I finally became Benin’s first plastic reconstructive surgeon.”

Dr. Odry Agbessi sits in the cafeteria onboard the Africa Mercy, squeezing in lunch between mentoring sessions with volunteer plastic surgeon Dr. Tertius Venter (ZAF). She’s eager to get back down to the OR, but it’s not her first time in the Africa Mercy hospital. She loves coming to the Africa Mercy because of the atmosphere and the way people interact with one another, including with the patients. During the ship’s last visit to Benin in 2009, she assisted Mercy Ships surgeons. Now, with the Africa Mercy’s return, she joins Dr. Venter whenever time permits. “We can teach and learn a lot,” says Dr. Venter. “I was certainly impressed with her knowledge.”

“I’m learning a lot,” Dr. Agbessi says. “I’m finally learning how to really operate on burns. That’s been my goal since age 12.”

In West Africa, it’s rare that medical professionals have the opportunity to gain advanced training, practice on newer technology, and liaise with experts in their field. That’s one reason so many African doctors leave for Europe, Australia, or the States. “It’s not that it’s hard to keep your skills updated here … it’s impossible,” comments Amy Jones, Project Manager for the Mercy Ships Medical Capacity Building (MCB) Team.

But for Dr. Agbessi, staying in Benin is a must – surgeons may leave, but patients cannot. So, she has to find ways to gain and share knowledge. “Earlier this year, Dr. Agbessi sought me out and told me that she needed to attend our pain management class,” recounts Abby Watrous (USA), of Mercy Ships MCB team, remembering when Dr. Odry first approached her.

“Afterwards, she thought it was such important knowledge to have, that she taught the course to 20 nurses at her own hospital, CNHU, which also happens to be Benin’s largest teaching hospital,” adds Jones. Thanks to Dr. Agbessi’s efforts, the course is now part of CNHU’s core curriculum for certain specialties.

Dr. Agbessi is Benin’s first and only plastic reconstructive surgeon. As she continues working in her own operating theater, she’s not blind to the challenges she’ll face. “We see a lot of things here,” she says … and that probably includes women as badly burned as the one who inspired her in the first place.

“I believe that when you are given a gift, you are meant to share it,” she says.  And that is exactly what she’s doing.