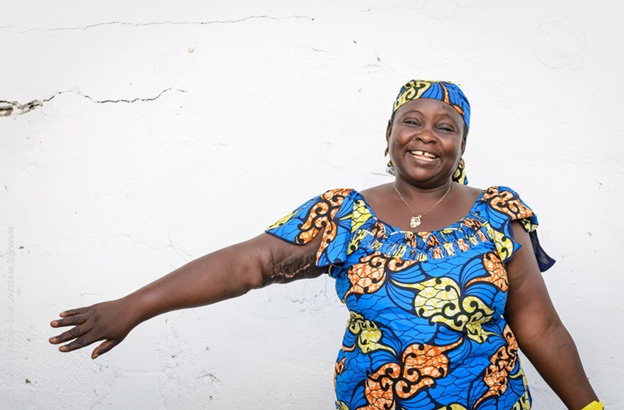 Fanta has worked in the medical field for over 17 years, but she was afraid to have surgery herself to remove a 10-pound tumor under her right arm. For 10 years she hid the tumor under draped shawls while she worked.

“How can I expect people to respect me as a nurse and not be scared themselves when I am too afraid to do anything about my own problem?” Fanta asked.

Since she was a young girl, Fanta saw nurses at her local hospital in their uniforms taking care of people, and she knew she wanted to be a nurse, too. So, she worked hard to achieve her dream. But, her melon-sized tumor made it difficult to wear the long-desired uniform. The tumor grew relentlessly. Something had to be done, but she was afraid to have surgery.

Fanta explained, “My colleagues told me I would die if I tried to have it removed or if I left it too long. I saw the surgeries, I saw the blood, and I hated the thought of not being in control of my own body.”

But when she heard about Mercy Ships, hope replaced worry. After her initial screening, Fanta felt surprisingly at ease.

“The nurses at the ship were so compassionate and loving. They kept reassuring me that everything was going to be more than okay…and something in me trusted them!”

Fanta’s three-hour surgery removed more than just her tumor. It replaced her anxiety with hope.

“I can now lift my arms with ease! I will be able to dress like the other ladies at my hospital. My husband has already bought me some new fabric so I can make more dresses that show off my arms!”