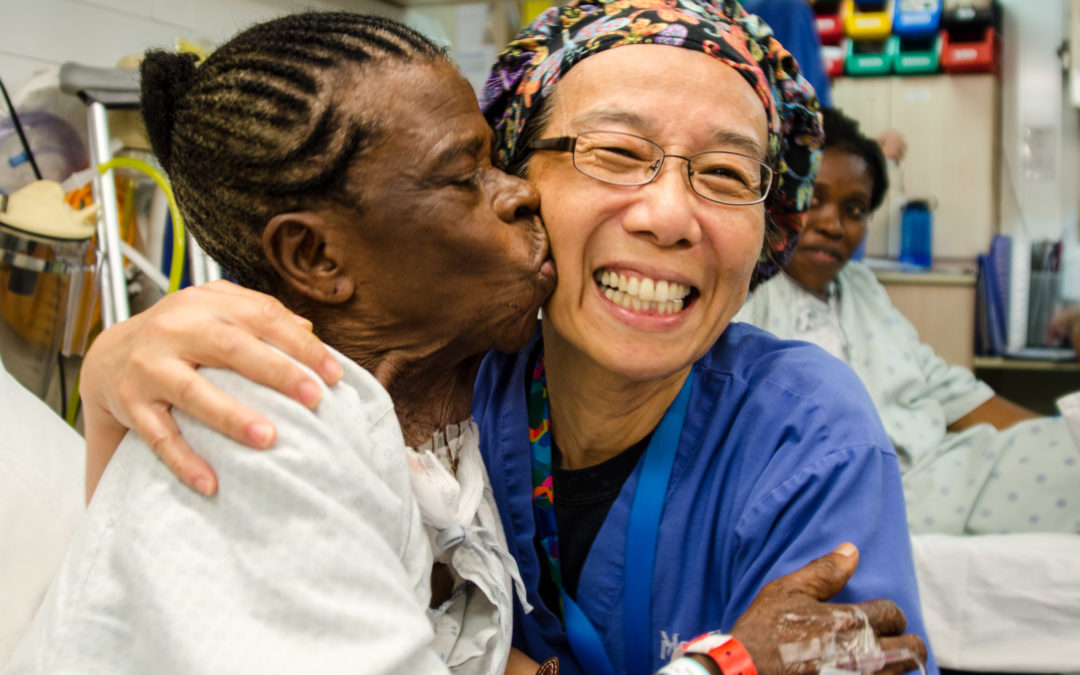 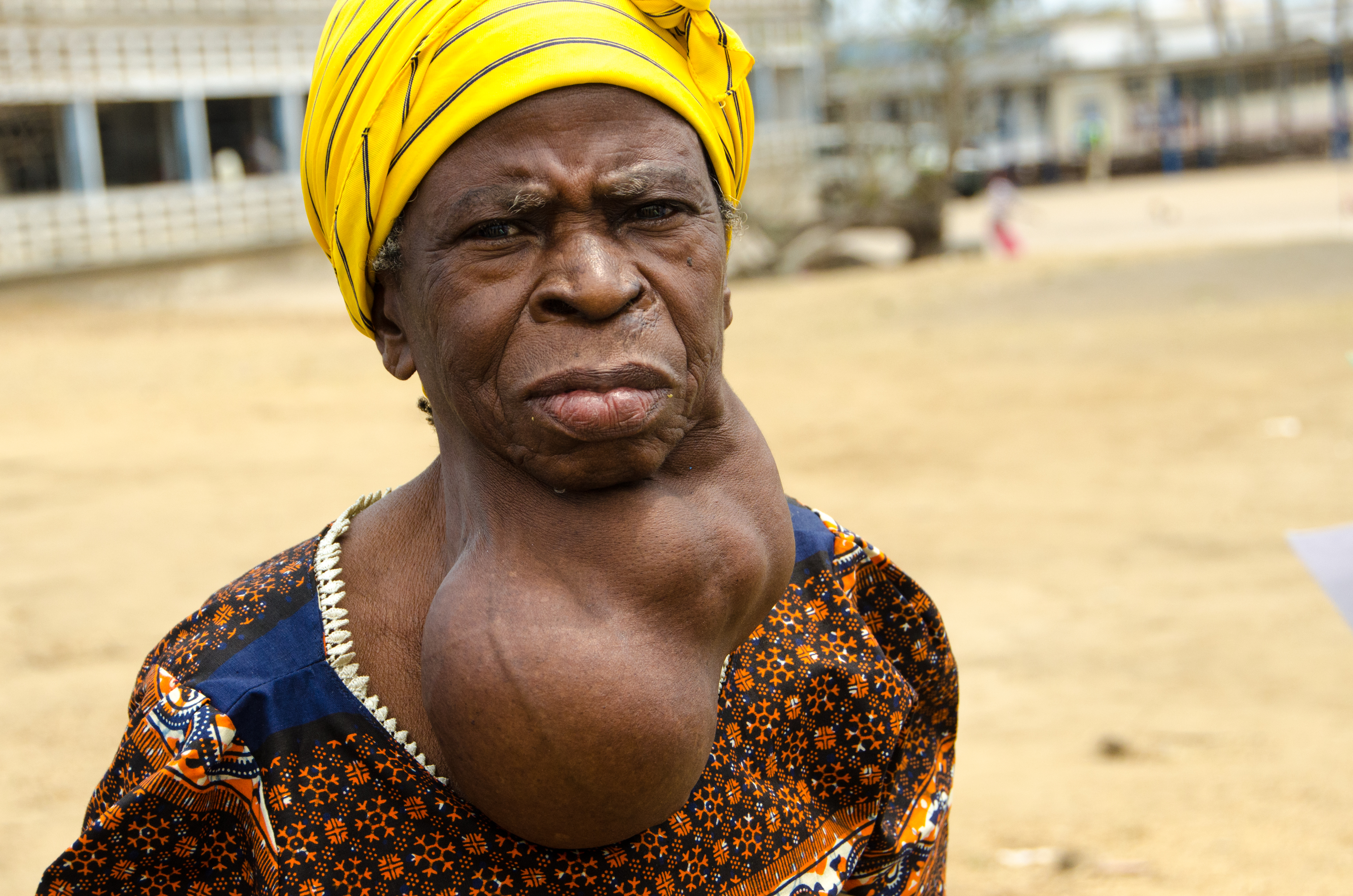 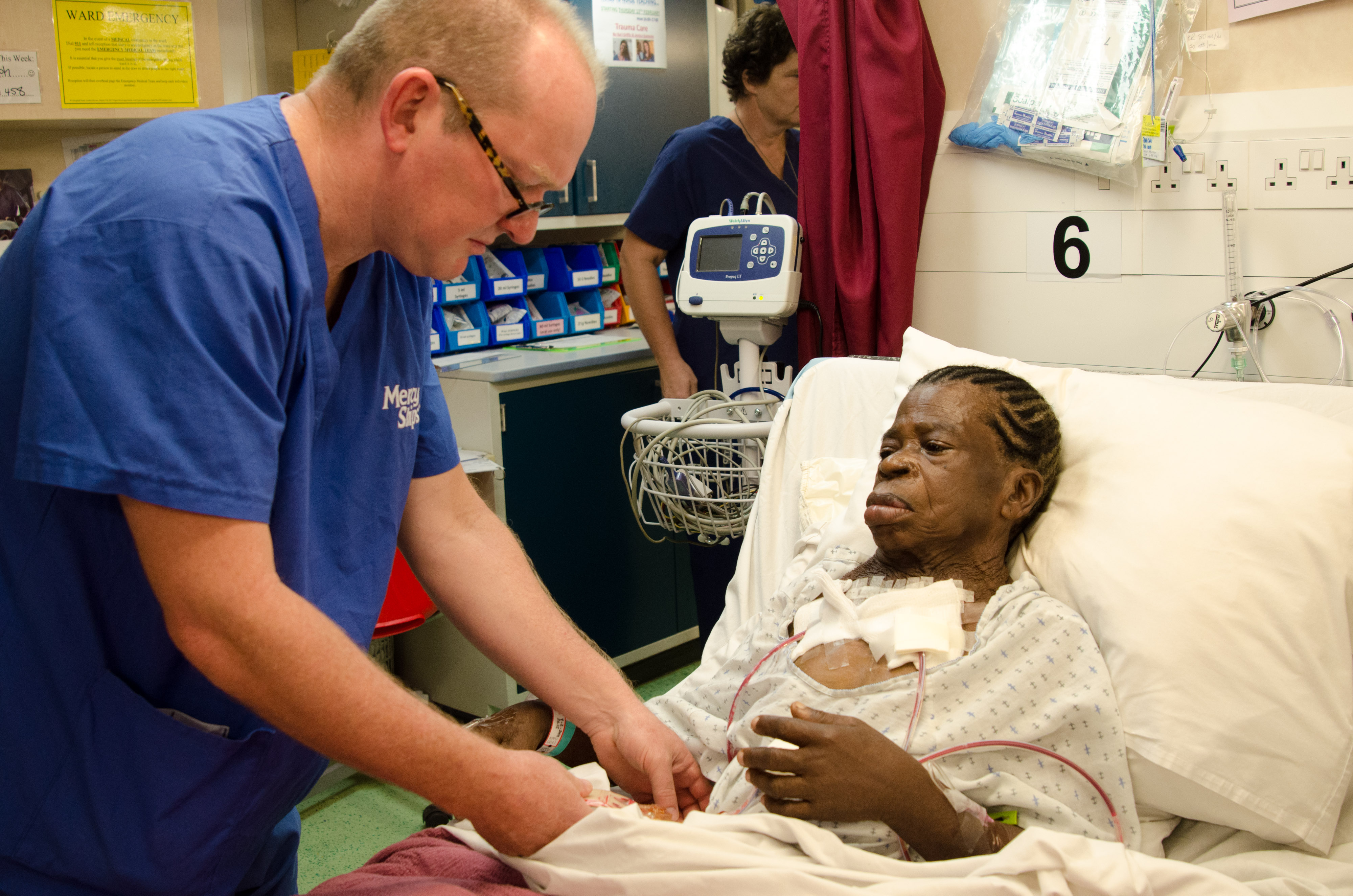 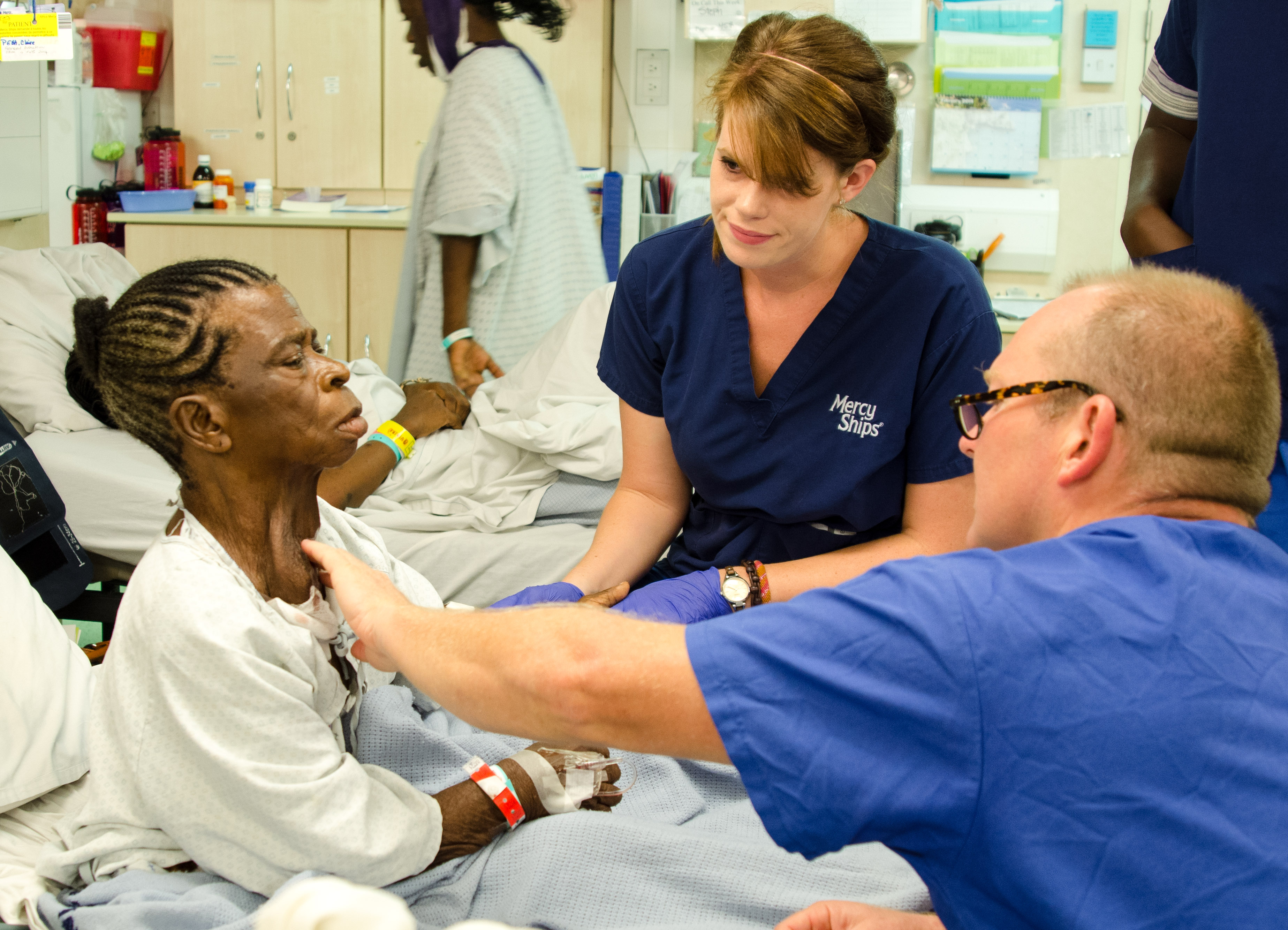 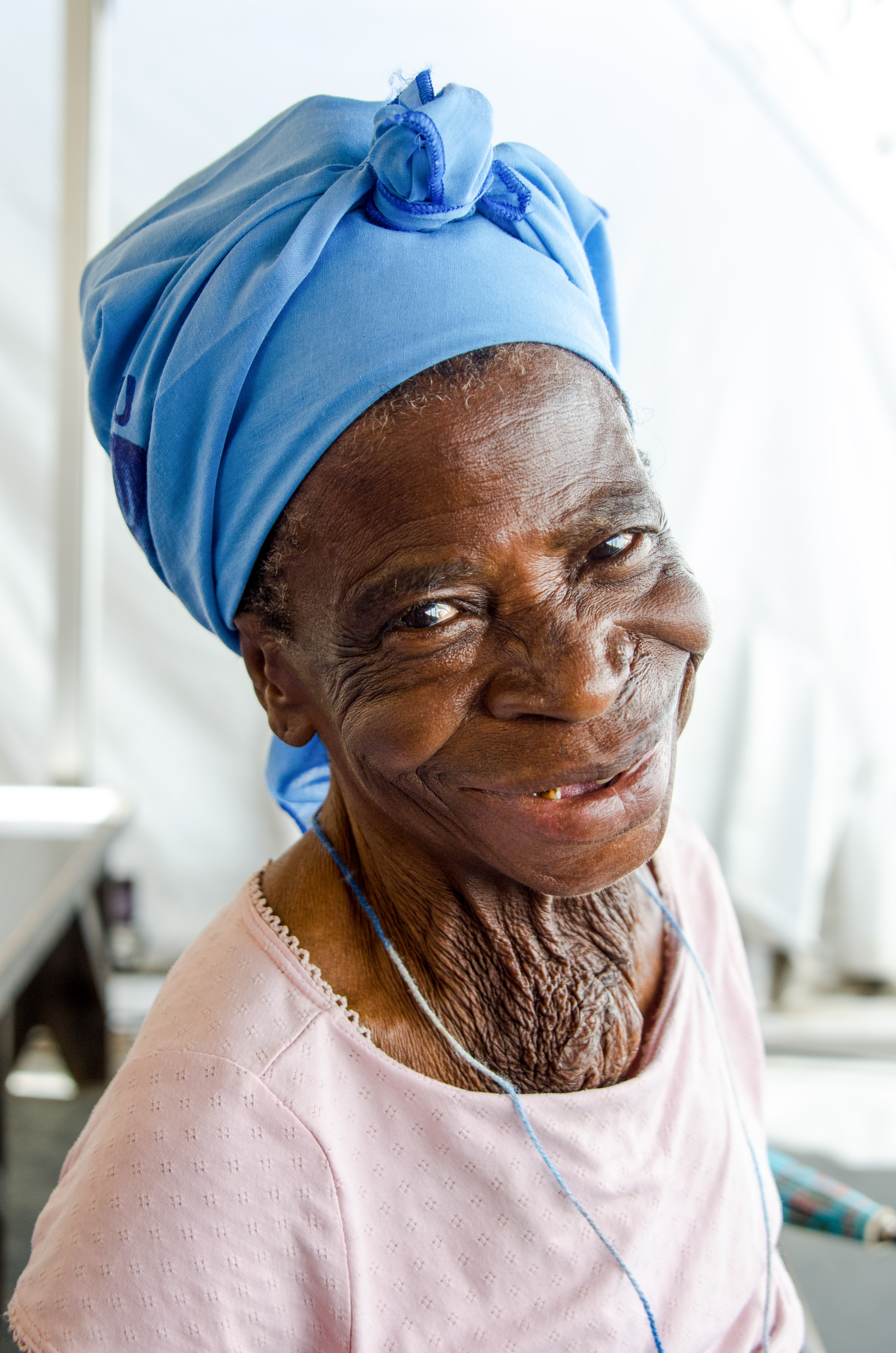 For a barely four-foot-tall woman named Claire, social rejection was a daily reality. The focus of this negative attention was an enormous goiter hanging conspicuously from her neck like a sack of oranges.

In the chaos of the street market in Pointe Noire, Congo, Claire just wanted to shop unnoticed. As she wove her way through throngs of shoppers, she tried to ignore the stares and the brusque way she was shoved by passersby.

But then, as usual, attention suddenly focused on Claire. She recoiled as insults were hurled at her, and people stopped to stare. As a crowd gathered around her, someone declared that she was a witch. Another yelled that she ate human flesh, and that’s what caused her neck to enlarge. She quickly turned away in shame, tried to cover the softball-sized bulges of the goiter, and pushed past the crowd to escape.

The emotional trauma of verbal insults added to the physical ache from carrying the misshapen, heavy mass. The pain radiated down her back, all the way to her waist. With no money for surgery, she felt hopeless. The only way to avoid the ridicule was to become a recluse.

Emotional pain was certainly no stranger to Claire. Eight of her twelve children had died of malaria and other illnesses; only four had reached adulthood. And how, she had only one surviving daughter, Olga. Since the age of 8, Olga, now 36, had watched the mass on her mother’s neck enlarge. Now Olga has 3 children of her own to take care of, as well as her beloved mother. She said, “It hurt me so much to see my mother with this condition. When I was young, I woke up every day and looked at her to see if it was gone. I prayed that one day God would do something to help us. Neighbors told us that we could get it removed with surgery, but we had no money for that.”

As the goiter grew, Claire was no longer able to plant and harvest crops – cassava, peanuts, and sweet potatoes – to provide income for her family. It became too painful to bend over.

When Claire’s husband died in 2004, she had to depend upon her daughter Olga for support. Despite the lack of running water or electricity, Olga’s small tin shack provided shelter from the elements. Claire’s bed was a thin pad on the floor draped by a mosquito net. As soon as the tropical sun rose above the other houses, it became too hot to stay inside. The family would sit under a large avocado tree while Olga heated water over a fire to make coffee to drink with bread and butter for breakfast. Lunch consisted of fish, if they had enough money to buy it, and cassava.

They had no way of knowing that a staple in their diet, cassava, was a goitrogen, a class of food substances that cause goiter growth. Mercy Ships volunteer Endocrine Surgeon A.J. Collins explains, “In Africa, eating cassava is a well-established cause for promoting the growth of large goiters. It contains a compound called thiocyanates, and this is a powerful blocker of iodine uptake into the thyroid gland,” said Dr. Collins. Lack of iodine is one of the factors that contribute to enlarged goiter growth, which is all too commonly seen in the African population. Simply providing iodine supplementation does not cure the problem.

In August last summer, a local pastor stopped near Olga’s home. He made an announcement on a loud speaker that a hospital ship was coming to provide free surgeries. It was a Mercy Ship.

The pastor showed Claire “before” and “after” pictures of another person with a goiter who’d had a free surgery onboard the Africa Mercy. She was shocked to see someone else with the same huge mass bulging from their neck. And she realized that maybe she could be healed! She became giddy with excitement, laughed out loud, and jumped up and down with joy. The pastor explained that the Mercy Ship would have a Patient Selection Day in one week. “I want to go there now!” Claire exclaimed excitedly.

Claire and Olga attended Patient Selection Day for Mercy Ships with over 7000 other people from all over Congo and some neighboring countries. Finally, it was Claire’s turn to be examined by the Mercy Ships volunteer medical team. She was thrilled when she received an appointment for a free surgery onboard the Africa Mercy to remove her goiter.

Surgery day couldn’t come soon enough for the 73-year-old who had carried this heavy load for twenty eight years. By this time, the huge goiter had grown to more than 3% of her 35 kilos of body weight.

On the day before Claire’s surgery, Olga, wrapped in a colorful African scarf, sat beside her mother’s hospital bed. They had waited and prayed for so many years for this moment to come.

The next day, nurses escorted Claire to the OR where surgeon A.J. Collins was waiting. The surgery took several hours due to the size and complexity of the abnormal growth.

Olga wept when asked how she felt about seeing her mother after surgery. She could barely even remember what her mother had looked like before the large mass had started to grow.

“I’m so overwhelmed with joy,” Olga said. “The first day we came to meet Mercy Ships we didn’t know what the outcome would be. Right now, I want to say a big ‘thank you’ to Mercy Ships and all the doctors and nurses who changed my mother’s life. I never thought my mother would have this surgery. She had this condition for so many years. I’m very, very happy.”

Now, Claire will be able to walk down the street and shop in the local market without the fear of being mocked. She has been freed from both the physical and emotional pain.

At her post-operative checkup, Claire greeted her surgeon Dr. A-J Collins with a big smile and two thumbs up. “Before surgery, I was sick and very sad. But, now, since having the operation, I feel alive,” she remarked.