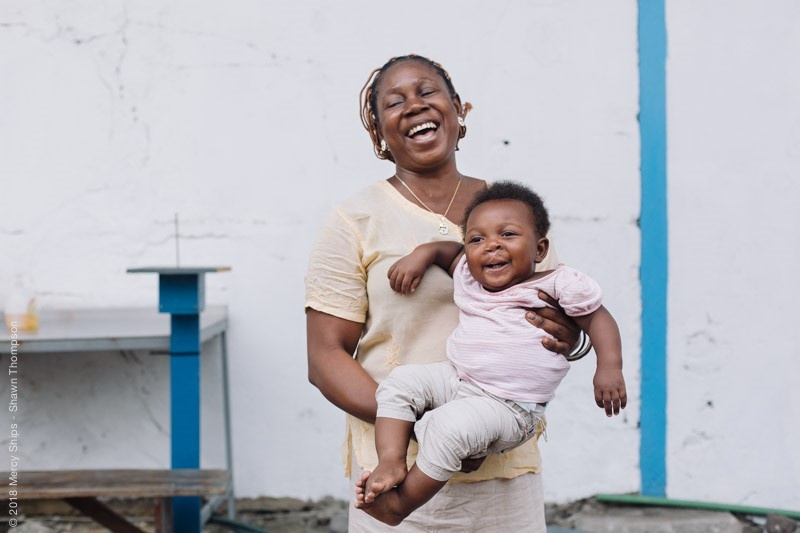 The first sight of 3-month-old Paul revealed a feather-light bundle cradled in his desperate mother’s arms. His skin was paper-thin and his body remarkably tiny. He weighed just over 2 kilograms (4.4 pounds) – less than he had when he was first born.

The tiny baby was born with a cleft lip and palate that made it impossible for him to nurse properly. It was a mother’s worst nightmare – watching helplessly as her baby grew thinner and weaker. “I didn’t understand why it was happening or what I could do to help him. I couldn’t breastfeed him properly. No matter what we did, he kept losing weight,” said his mother, Francoise, her eyes reflecting her weariness and fear. “We were so scared … we thought he would die.”

Despite the precariousness of his situation, this mother’s love knew no bounds. The hungry baby cried all night, so Francoise stayed up, rocking her tiny baby through the long nights with only the company of a kerosene lamp.

Baby Paul, like his mama, was a fighter. The Africa Mercy’s medical staff immediately recognized that his condition was critical. They brought him onboard before the hospital was even officially opened, so that they could monitor his temperature and feed him through a nose-to-stomach tube.

“The problem when they’re that small and weak is that they find it really difficult to suck. We fed him with a syringe and eventually got him to a special bottle made for babies with cleft lip and palate,” said Lee-Anne Borrow James (AUS), Infant Feeding Program dietician.

It was touch-and-go for a few days, but then the courageous little boy began to turn the corner toward healing. Once he was considered safe to leave the hospital, the dieticians checked Paul regularly to track his growth, measure the size of his head, arms and legs, assess his feeding, and continue suggesting methods for healthy weight gain.

Gradually, as the weeks passed, baby Paul began to visibly change. His formerly gaunt face was replaced by round cheeks. His hair grew thick and healthy. His formerly listless eyes were now glowing and content.

Paul wasn’t the only one being transformed. Hope bloomed in Francoise’s heart as she watched her baby slowly growing stronger. She dared to hope that this baby that people had once called “monster” would survive … this baby that was now adored by crew members and other patients. She said, “When I look at my baby, I can only cry – but it is tears of joy. Even I am gaining weight, now that I can eat and sleep!”

“The dynamic between dietician, mother and infant is a special one to be a part of,” says Lee-Anne. Many mothers struggle with believing that their baby’s condition is not their fault, but is instead something that occurred naturally and can be fixed. It took time for Francoise to trust the affirming words of the Mercy Ships dietician team. “It’s been amazing to watch over time how she’s worked very hard for her baby. She’s quite determined. She fiercely knows what she wants and what she needs to do,” said Lee-Anne.

Three months after the dietitians first met Paul Pascal, he weighed more than 6 kilograms, and was finally ready for the first of his surgeries. This operation connected the muscles of his soft palate and closed the gap in the roof of his mouth, enabling him to eat and speak normally as he grows up. “His cleft palate repair was the culmination of our team’s efforts,” said Janet Stucky, the volunteer Clinical Dietician and Infant Feeding Coordinator. “Baby Paul had a successful surgery, which will change his life forever.” His cleft lip repair was a resounding success, leaving Paul with just a small healing scar.

Francoise’s heart was overflowing with joy and gratitude! “When I go back home, people will say, ‘Look! This is not your baby. You’ve gone to the city and exchanged your baby!'” she cried.

After a short hospital stay later, Paul’s journey with Mercy Ships was complete. Now weighing over 9 kilograms (almost 20 lbs), no one could recognize the gaunt baby they’d first seen. Francoise was able to bring Paul home to their astounded family and friends. “They were astonished and amazed,” she said.

He was one of the first patients up the gangway in Cameroon, and was also among the last to receive surgery in the final weeks before the hospital closed. Loved by the crew, Paul was a reminder to everyone of the transforming difference hope and healing can make.

And now, Paul Pascal has reached a milestone his mother thought she would never see: his first birthday!

Paul came to the Africa Mercy close to starvation, but he’s leaving the ship as a little boy with his whole life ahead of him.