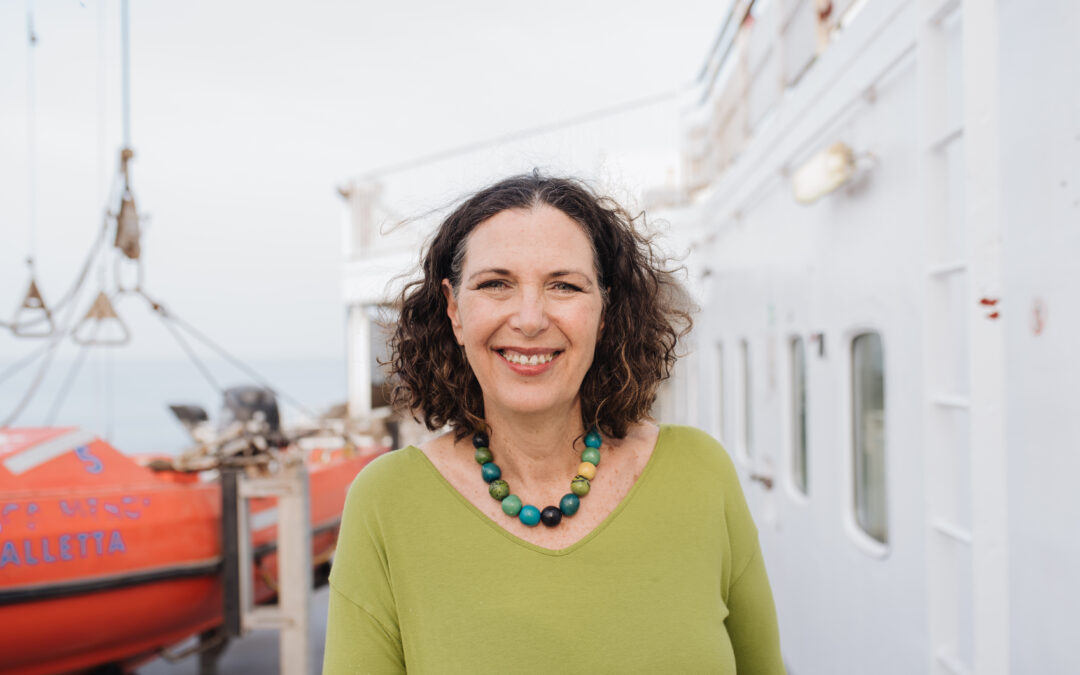 When Susan joined Mercy Ships, she was 25 years old. She only planned to stay five months.
“That was in 1987,” she remembered. “Five years later when I married Gary, I never imagined
that I was signing up to spend most of my adult life on a Mercy Ship.”

Dr. Gary Parker is an oral and maxillofacial surgeon — the only one who lived full-time on the
original flagship, the Anastasis. Susan first worked as Mercy Ships Founder Don Stephens’
assistant. It was Susan’s time with Don & Deyon that prepared her to later serve as director of
the ship’s Discipleship Training School (DTS) for young volunteers.

“From 1987 to 1994 both Gary and I were working in jobs that we loved and that made us feel
alive,” Susan said. “We had to dig deep and lean into the Lord as we were stretched beyond
what we thought we could do — but those were exciting and fulfilling times.”

Susan thinks of her five years leading the DTS students as one of the most challenging and
rewarding seasons of her life.

“We were a team of 12 friends leading four schools per year and bearing witness to the radical
transformation of countless young lives,” she said. “That just never gets old. I expected that my
work on the ship would always be like this.”

But if there’s one thing Susan has learned in her many years at sea, it’s that God rarely works in
exactly the way she expects.

Parenting on Board
In 1994, Gary and Susan had their first child, Carys.

“Of course, we were delighted,” Susan said.

But with no childcare available for first-year parents on board the ship, Susan was no longer
able to work in the way she was used to. Overnight, she went from DTS director to full-time
primary care giver.

“I knew with my head that I was still a valuable part of this community with something to
contribute, but to be honest, some days it was a bit of a mental balancing act not to feel sidelined,” she said.

Despite wrestling with the change, Susan enjoyed her first years of parenting.

In October of 1998, Gary was made CEO of the Anastasis. He and Susan had a second child at
that point, 10-month-old Wesley. Because Gary was also the Chief Medical Officer and working
full time as a surgeon, Susan took on many of the duties of the CEO office. Six months later,
she was also asked to take on the responsibility of training director.

For several years, Susan and Gary both continued working at what felt to Susan like 150%
capacity.

Adjusting Expectations
During this time the ministry of Mercy Ships was growing, as the Anastasis sailed from Benin to
Guinea to The Gambia to Sierra Leone, providing free surgeries, dental care, and medical
training. At every port, Susan and Gary were at the forefront of the work.

In 2007 the family moved to a newly outfitted, bigger, and more modern ship, the Africa Mercy®.
The crew grew, and the capacity for surgeries increased. But for Susan, another turning point
had arrived.

“As we were transitioning from the Anastasis to the Africa Mercy, physically, I hit a wall,” she
said. “That’s when it became apparent to me that something had to give. I could no longer give
150% to my job, if Gary was going to continue to do that, too.”

“One of us had to be more intentionally present and not continually distracted by the press of
people and work and tempted to put our young children in front of yet one more video,” Susan
recalled.

Susan knew that at this juncture, there was no one who could replace Gary’s surgical skillset or
consistency of care on a full-time basis.

So Susan made a choice — one she knows many of her fellow Mercy Ships parents have
faced. She turned her focus to a different kind of leadership role.

“I think what I did, in fact, was to take everything I had learned from Don and Deyon, and from
leading the discipleship training school, and then later from being a part of the primary ship’s
leadership team,” she said. “I took all of those lessons and turned my focus to the discipleship of
our children in really intentional ways.”

She knew she was also ensuring that her family could remain on board, allowing Gary to
continue to offer surgeries to the countless patients who needed them.

Stepping back from the positions she loved was not an easy decision, Susan acknowledged. It
took humility. Some days, her life didn’t look the way she’d imagined. But she could see without
question how her choice was having a powerful impact on her children.

Today, Carys is 27. She’s a hospital chaplain and she’s graduating with a master’s of divinity.
Wesley is 24, and working toward a master’s in nutrition and exercise physiology. Susan has
witnessed how a childhood spent volunteering in Africa changed them.

“They both have a worldview that bends toward the oppressed and the marginalized,” she said.
“I see them always looking out for the person that is on the fringe.”

Susan didn’t give up on her desire to learn and grow during those years. In 2010, she received
her master’s degree in global leadership from Fuller Seminary.

Now, with her children grown up and living in the U.S., Susan accepted the call to serve as the
Africa Mercy Hospital Chaplaincy Program Manager on an interim basis. To her surprise, it has
proved to be one of the most meaningful positions she’s ever served in.

Today, when Susan looks back on over 30 years on a Mercy Ship, she can see how all the
pieces fit together and how God was always at work – even when she didn’t feel it, even when
she couldn’t see it.”

“Nothing is wasted in God’s economy, and so to the degree that we welcome or allow God’s rule
and reign in our lives, we are being transformed in all dimensions of our life,” she said. “The
“good job” or the “exciting job” is not the goal – transformation into the people of God who in
turn can then participate in the kingdom work of transformation in the lives of others – now that’s
where the action is.”

Looking to the Future
This spring marks a turning point in the relationship between Mercy Ships and Africa — and the
future of African surgical, obstetric, and anesthetic care.

Heads of state and scientific experts from across the continent gathered May 4-6 to assess the
healthcare systems in each country. At the end of May, they’ll sign the Dakar Declaration,
committing to a strategic plan for improvement by 2030.

At the same time, another milestone will take place in Senegal. The new Global MercyⓇ will be
commissioned, beginning her service as the first purpose-built vessel in the Mercy Ships fleet.
Susan is in awe of the new bigger, better hospital and how it will expand, improve, and multiply
Mercy Ships’ patient services. She is also excited about the other amenities on board like the
stunning crew chapel, impressive gym, and beautiful crew lounges throughout the ship.

“But ultimately it won’t be the spaces that make or break our faith community,” she said. Instead,
it will be the lives of those who live on board and follow Jesus.

Forgiveness, leadership that serves, humility, kindness. Over more than three decades on
board, Susan has found that these are some of the characteristics that build strong
communities.

“God by his Spirit is at work all around us reconciling and restoring all things . . . I believe it will
be this kingdom quality of our communal life together that will pave the way for the ambitious
goals Mercy Ships has to support the African people in this next chapter.”

Learn more about the Mercy Ships Africa Celebration, and how Mercy Ships is supporting the
future of safe surgical, obstetric, and anesthetic care in Africa, here: https://mercyships.africa/africa-celebration/