Sambany – the largest tumour Mercy Ships had ever seen 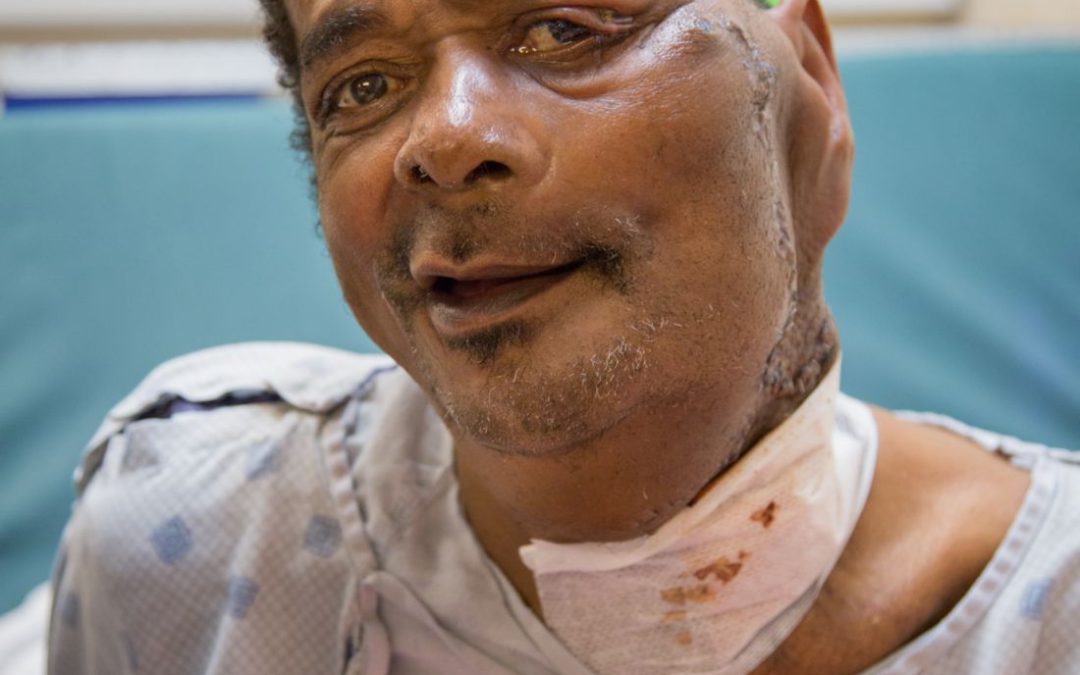 The man trembled up our gangway and did something extraordinary . . . he changed our lives while we were changing his life.

Over the next few weeks, his name was spoken across the Africa Mercy’s eight decks, thousands of tears and prayers ascended to God, and social media exploded with his story. What was so special about Sambany?

Around 36 years ago, a tumour began to consume Sambany’s life. It became a monstrous burden, weighing 7.46 kg (16.45 lbs) – equivalent to two extra heads. After nearly three decades as a maxillofacial surgeon, Dr. Gary Parker, Chief Medical Officer, says, “It’s one of the biggest tumours of this type that I’ve seen.” 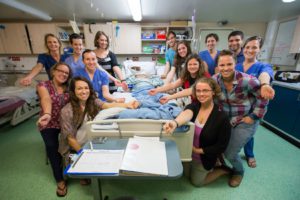 The tumour caused unrelenting discomfort. Sometimes it felt “hot like fire.” Sambany said, “I cannot sleep at night, and even during the day. It heated me up. When walking, it’s too heavy. I have to hold it.”

The tumour was also an emotional burden. Family and friends rejected him, mocked him, laughed at him, and shunned him. Some thought his condition was contagious.  Harsh words were flung at him: “Why are you still alive? No one can help!”

Hopelessness defined his life. Sambany’s poverty blocked any other option. His despair reached new depths. “I was waiting to die. I could not do anything. Every day, I was just waiting to die,” said Sambany.

So, Sambany’s world shrank to the size of his house, his only place of safety and peace.

Sambany’s main companion was the radio. One day he heard an announcement that resurrected hope: a hospital ship that could treat tumours for free was coming to Madagascar. In spite of his weakness, Sambany told his family, “Die or survive, I want to go!”

It was a journey that only a desperate man would attempt. How could he survive such a journey? But his family recognized his desperation and determination. They sold a rice field to pay for the journey. Five people took turns carrying him on their backs for two days. Then Sambany endured a painful six-hour taxi ride … but he made it. 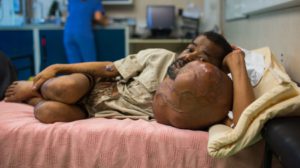 As he rests is head on his massive tumor as he waits to be seen by the surgeons to determine if he can have surgery or not.

Due to multiple health concerns, Sambany’s surgery would be extremely high-risk. For almost two weeks, he rested as the medical team determined the best course of action. During this time Sambany penetrated our lives; many a tissue was dampened with tears for this stranger from a country far from our own.

Together with Sambany they finally reached a decision. Knowing the risks, he would go ahead with the surgery. The night before his surgery Sambany said, “I know without surgery I will die, I know I might die in surgery, but I already feel dead inside from the way I’m treated. I choose to have surgery.”

The maxillofacial team began surgery on the largest tumour Mercy Ships had ever attempted to remove at 7.46kg. Everyone prayed. Our crew, our living blood bank literally poured life into Sambany. The blood of seventeen people from six nations now runs through his veins.

It took the surgical team of eight more than 12 hours of high pressure to conclude the operation. Around midnight they staggered to their cabins, exhausted but exhilarated. After 19 years of anguish for Sambany, the tumour was gone.

When Sambany saw himself in the mirror for the first time after surgery, he said, “I like it. I am happy.” And he repeatedly declared how happy he was, and his gratitude to God for the amazing result. “God saved me!” he said.

Dr. Gary says, “I think that every human being has the right to look human. To be treated as human. To have a place at the table of the human race. And when you have been deprived that seat, and it’s offered to you again . . . to be able to re-enter the human race and to look like everyone else . . . that’s a fantastic thing.”