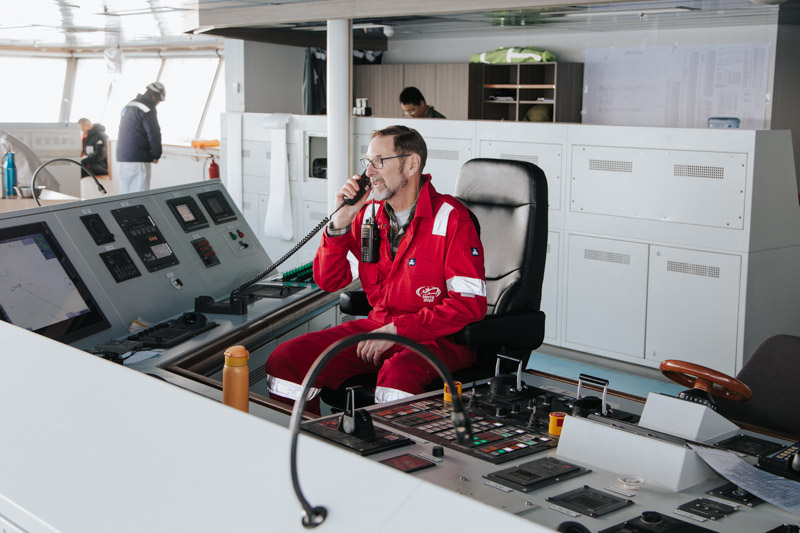 The Mercy Ships community onboard our hospital ships is like none other. Our volunteer crew bring their unique skills and vibrant life experiences from around the world to serve the people who need it most. It’s about so much more than a professional title. It’s about bringing all that you are – both in and out of the workplace. Whether you’re a physician who leads workout classes, an accountant who is the karaoke queen, or a teacher who also competes in an acapella troupe, Mercy Ships needs more of you.

Discover the stories of Mercy Ships volunteers that have made their mark onboard.

Meet Captain Taylor Perez. As the first Captain onboard the newest Mercy Ships vessel, Captain Taylor is quite literally pioneering a historic new wave for the organization. Of course, the Global Mercy is not only just the newest member of our fleet – she’s also our first purpose-built vessel and happens to be the largest civilian hospital ship in the world. For Captain Taylor, standing at the helm during her maiden voyage is quite the honor:

“This is where I feel called right now. I have confidence about that.”

Captain Taylor was first introduced to Mercy Ships in 1984, when his ship stopped in Hawaii to refuel on its way from the States to Asia. Our previous ship, the Anastasis, was docked nearby, and some of the crew invited him onboard for lunch.

“I was absolutely stunned by the quality of the crew and atmosphere onboard,” he said. “They were very impressive, and it was a very professional organization.” Captain Taylor also noticed something else: a contagious energy. “It was full of families, liveliness, community… I thought, ‘wow. Something’s going on here.’”

It was a chance first meeting that captured Captain Taylor’s heart for the ministry. Afterwards, he began to volunteer with Mercy Ships during his time off, getting a taste for what volunteering onboard a hospital ship was really like. Since then, he has captained every single one of the Mercy Ships fleet at one point or another, often with his wife (whom he met onboard) and children.

“The ship is vital to the hospital. The hospital could not bring hope and healing without the ships. The doctors and nurses, who do such an amazing job, could not operate without the ships. The ship can’t operate without its mariners… We don’t just need doctors and nurses, we need Deck and Engineering Officers, Engine Ratings, ABs, Motormen, Engineers as well as carpenters, electricians and other professionals who can take the time to see something different and be part of something with a big impact.”

Captain Taylor has plenty of hard-earned skills to offer: “I bring 40-plus years of marine experience, the majority of it as a captain of various vessels.”

But that’s not all that Captain Taylor brings to the table. He calls himself “sort of a grandfather” presence onboard: “Because I’m older, in this season of my life I bring some peace and calm… hopefully, I bring stability.”

Serving in the Storm

During a particularly challenging season, his stability was needed more than ever. Captain Taylor was at the helm during our field service in Senegal when the COVID-19 pandemic broke. He was responsible for making unprecedented decisions on a quick deadline. “The process held a lot of unknowns. People were nervous – it was a time of high anxiety with lots of questions and very few answers.”

Fortunately, Captain Taylor was able to use his strengths to lower stress while ramping up morale.

“I tried to be open and transparent and keep spirits up as best as I could so that it wasn’t all gloom and doom. I tried to get people comfortable.” Part of keeping spirits high meant learning – perhaps unintentionally – the saving power of a good sense of humor: “I didn’t know I was funny, but they tell me I was funny – what can I say?”

A Captain’s Many Unofficial Job Titles

Captain Taylor decided to bring a smile to people’s faces by serving in an unexpected way. You’d expect to see the captain in the bridge – but what about behind the coffee bar? Deciding to embrace the unofficial side job title of barista, Captain Taylor spent his free time volunteering in the café onboard.

“I’m told there is a picture of me still onboard the ship with my barista apron on. It’s pasted to the coffee machines on the ship. We were short-handed because of COVID, so it made life fun to interact with people and serve them in a different way.”

Around this time, Taylor also earned a new nickname… Captain Popcorn! As a self-proclaimed popcorn fan, he discovered that there was a large popcorn machine in the crew galley onboard. When he’d get cooking, families would often stop by with their children to receive a salty serving. Apparently, he made quite the impression: “One time I came across the school giving a tour to all the children. Two of the little kids saw me and said, ‘Oh look, it’s Captain Popcorn!’ I got a kick out of that.”

Find Your Place Onboard

At the end of the day, Captain Taylor knows he’s where he is meant to be during this pivotal moment in Mercy Ships history. It doesn’t matter who you are or where you’re coming from, because there is a need for everyone onboard – not just what you can bring to the job, but the invaluable “you” that you can contribute to our community.

With one last parting word of wisdom, Captain Taylor says, “If you want to be stretched and make an impact in the world, this is an amazing place to do it. You are impacting lives in an incredible way.”

Mercy Ships needs more of you. Ready to make your mark? Find your place onboard at https://www.mercyships.org/makeyourmark1/